Margaret Stillwell, from Librarians are Human.

While Stillwell was still an undergraduate at Brown University, George Parker Winship hired her to be an assistant at the John Carter Brown Library, where she worked for seven years. From 1914 to 1917, she worked at the New York Public Library to catalog the early Americana collection under the supervision of Wilberforce Eames. There she met Chester Cate, a librarian of the Huntington Library, and they soon fell in love. He died in a supposed hunting accident several years later, and after that she never married.

In 1917, General Rush C. Hawkins recruited Stillwell to become Curator of the Annmary Brown Memorial Library in Providence. Three years later, General Hawkins unexpectedly died after being hit by a taxi while crossing the street. Unfortunately, after his death the library trustees discovered that the promised endowment for the library had never been officially put in his will. With extremely limited funding and little support from the library trustees, Stillwell faced numerous challenges in continuing her work. She remained dedicated to completing the work General Hawkins had hired her to do, even though he had not left any funds with which to accomplish it.

The library had no heat or electricity in most of the building for the first ten years, and winter temperatures at Stillwell’s desk routinely dropped to as low as 44 degrees Fahrenheit. After years of pleading with the trustees, she finally had to threaten to resign if heat was not installed before the next winter. The trustees also refused to buy essential reference works, so Stillwell had to borrow them from friends at other libraries.

In 1948, when the library was transferred to the management of Brown University, Stillwell was the first woman to be appointed to a full professorship on the University Faculty, although she never received a full professor’s salary. 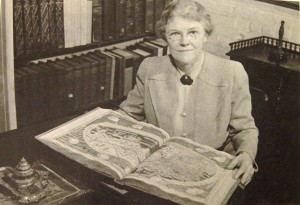 Stillwell published a number of scholarly works on the subject of early printing, as well as her memoir, Librarians are Human: Memories in and out of the Rare Book World, 1907-1970. Her greatest achievement was the massive survey Incunabula in American Libraries, a Second Census, published in 1940 and usually known simply as Stillwell. She was a very productive scholar, publishing at least 18 titles in all, even with the limited resources she was forced to work with. She was invited to become a member of the Hroswitha Club of American women book collectors, which she recalled as one of the most enjoyable experiences of her life, and she became the first honorary woman member of the Grolier Club in 1977 on the day after her ninetieth birthday.

Her contemporaries in the rare book world included Belle da Costa Greene of the Morgan Library and Ruth Shepard Granniss at the Grolier Club Library. While studying Ruth Granniss’s correspondence at the Grolier Club Library, I was delighted to see letters to and from Belle da Costa Greene and Margaret Stillwell, which hinted at friendly and collegial relationships among all three. They served on various committees together, visited each others’ libraries, sent congratulatory notes on each others’ exhibits and publications, and shared references and books back and forth. Despite their different personalities and backgrounds, they shared the experience of being women in a male-dominated rare book world, and it was wonderful to see a little of this in their letters.

The Awakening Interest in Science During the First Century of Printing, 1450-1550, an Annotated Checklist of First Editions Viewed from the Angle of Their Subject Content (New York: Bibliographical Society of America, 1970).

Beginning of the World of Books, 1450 to 1470: A Chronological Survey of the Texts Chosen for Printing During the First Twenty Years of the Printing Art, with Synopsis of the Gutenberg Documents (New York: The Bibliographical Society of America, 1972).

Bibliographical Survey: Printing in the 15th and 16th Centuries as Represented in the Hunt Collection, with a Note on the 17th Century (Pittsburgh: Hunt Foundation, 1958).

Essays on the Heritage of the Rennaissance from Homer to Gutenberg (Providence: Brown University, 1982).

General Hawkins as He Revealed Himself to His Librarian, Margaret Bingham Stillwell (Providence: 1923).

The Heritage of the Modern Printer (New York: The New York Public Library, 1916).

Incunabula in American Libraries: A Second Census of Fifteenth-Century Books Owned in the United States, Mexico, and Canada (New York: The Bibliographical Society of America, 1940).

The Influence of William Morris and the Kelmscott Press as Shown by an Exhibition of Books from the Later English Presses, at the John Carter Brown Library in December, 1911 (Providence, 1912).

Librarians are Human: Memories in and out of the Rare-Book World, 1907-1970 (Boston: The Colonial Society of Massachusetts, 1973).

The Pageant of Benefit Street: Down through the Years (Providence: The Ackerman-Standard Press, 1945).

Rhythm and Rhymes: The Songs of a Bookworm (Mount Vernon: The Press of A. Colish, 1977).

Vignettes and Rhymes on the Times: Observations of a Bookworm (Providence: Brown University, 1986).

While Benefit Street Was Young (Providence: The Ackerman-Standard Press, 1943).

One thought on “Margaret Bingham Stillwell, Curator and Scholar”

This site uses Akismet to reduce spam. Learn how your comment data is processed.